The Key Function In The Feedlot?

Help feeders think of their operation as a system and to control the variables as much as possible—including feed ingredients, quantity, product variation within loads and delivery timing among others. ( File Photo )

If you had to pick the No. 1 function needed for a feedlot to be successful, what would it be?

As a bovine veterinarian, you might say developing and following sound healthcare protocols. That’s certainly part of the overall equation, says Warren Rusche. But he contends the answer is feed bunk management.

“Health management, facilities environment and a marketing plan can all be undone if we don’t do an excellent job of delivering feed in the right way at the right time to the right set of cattle,” says Rusche, South Dakota State University (SDSU) Extension beef feedlot management associate.

For excellent feed bunk management, he advises trying to strike a balance between increasing feed intake, improving efficiency and adding weight on one hand and then, on the other hand, not doing too much too soon, which can open the door to digestive upsets, acidosis and poor performance.

Rusche says to help feeders think of their operation as a system and to control the variables as much as possible—including feed ingredients, quantity, product variation within loads and delivery timing among others.

“I think by trying to control as many of those variables as possible, we're building resiliency into the system to keep variation at a low enough level that the cattle can adapt to it,” he explains.

Often, if you focus on isolating one variable at a time, Rusche says cattle are able to adapt and not show significant decreases in performance.
But when two or three of variables get out of whack, even by just a bit, you will see significant performance variations. “The cattle then start telling us that the system isn’t functioning well,” he notes.

So how do you control variation? Rusche says it involves four things:
1.    Creating a language system that lets you describe and measure what you observe;
2.    Determining what the actual goal is, in terms of the feeding target;
3.    Developing systems, procedures and rules to guide management decisions based on what you observed;
4.    Implementing a method to track what has been done in the past and how cattle have reacted to the changes.

Create the language that lets you describe and measure what you observe.
Robbi Pritchard, Ph.D., now retired from SDSU, developed a feed bunk scoring system to give feeders a language they could use to describe what they observe.

The system is numerical and goes from 0 to 4. A slick bunk is a 0, meaning no feed remains in the bunk. A .05 bunk score might be that a scattered amount of feed is present, but most of the bunk bottom is exposed; a score of 1 is if a thin, uniform layer of feed goes across the bottom the bunk, usually about one kernel deep. At the extreme, a 4 essentially means the cattle have not touched the feed yet.

Rusche says one way to use bunk scores effectively is to check bunks at the same time every day, or as near to that as possible. That allows you to make more-informed adjustments relative to feeding each day.

Determine the target feeding goal.
When do you make a feed increase? In general, it’s when you, the manager and other key operators at the yard believe the cattle are ready. “I can’t tell you specifically, it’s something you need to figure out, based on the operation and your clientele,” Rusche says.

In general, he has observed that people use somewhere between a half pound to 1 lb. dry matter per head, per day as the increase. Sometimes, he sees the amount expressed as a percentage, perhaps 5%.

He recommends not making adjustments more than once every three days.

“If we try to be more aggressive than that, we may have cattle that can tolerate that for a day or two, but not for the third day, and we run the risk of overshooting,” he says, adding, “Those lower energy, lower-starch diets, are something that we may find in a backgrounding system are less risky, and so we might be more aggressive on some of those cattle.” 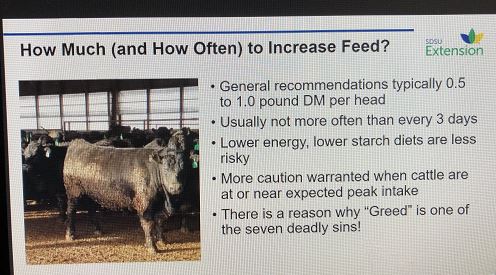 Develop systems, procedures and rules to guide management decisions based on what you observe.
Reading cattle behavior can be a critical clue as to whether or not to increase deliveries. For instance, evaluate how many cattle are waiting at the bunk in the morning. Do they appear hungry or do they appear content?

“If all the cattle are laying down and are paying absolutely no attention to the feed truck, that's probably an indication that they are at maximum intake and perhaps even beyond that,” Rusche explains. “If we’ve got a situation where a few of the cattle are coming to the bunk, and a few others are resting, we might be right at the sweet spot in terms of intake in that pen on that given day.”

Also, consider what the manure looks like. If the color is gray, or it’s very runny or liquid, that’s a pretty good indication that you may have some acidosis and need to be cautious about increasing feed, he says.

Environmental stress is another consideration in how much is fed to cattle in the lot. Right now, heat stress is a consideration. If cattle are dealing with that, Rusche says to consider shifting deliveries to the afternoon or early evening.

“That helps from the standpoint of shifting feed to when those cattle are more apt to eat and also shifting the heat of metabolism to what we hope would be the cooler part of the day,” he notes.

Finally, consider whether there been any kind of stress out of the ordinary--bunks needing to be cleaned, or if some mechanical breakdown occurred or things that caused some changes in what was, otherwise, a predictable system.

“That helps from the standpoint of shifting feed to when those cattle are more apt to eat and also shifting the heat of metabolism to what we hope would be the cooler part of the day,” he notes.

Implement a method to track what has been done in the past and how cattle have reacted to the changes.
Rusche says you need good records to know how or whether to make feeding adjustments. He says to have at least four continuous days that you track and record bunk scores to establish a benchmark that you can then reference and work from.

While you can use a pad of paper and a pen to accomplish this, iPads and smartphones can help automate some of the process and provide a faster feedback loop between the bunk reader, the cattle manager and other people at the yard who need to be involved in the decision-making. As an aside,

Rusche says records are handy when someone at the yard leaves or changes responsibilities and can be used to help train replacements.

“Keep track of your scores from the past and how much feed you’re delivering,” he advises. “You also need to know how many days, the span of days, the cattle have been on feed, whether the group is on a backgrounding diet compared to cattle that are on a finishing diet, some estimation of what they weigh, so we can start thinking about where they might be in terms of their maximum intake, and then also where those cattle have been in the past.”

Don’t rely on your memory to track all this information, he advises.

Things sometimes do go the wrong way.
Sometimes, no matter how much effort you put into a good decision, the feeding change simply goes south. Rusche says he polled a number of people across the feeding industry and that, almost universally, they said the No. 1 action leading to feeding problems was overfilling mixers.

“The thinking might be ‘I know if I stuff just a little more in here, I can save a trip and save a lot of time, so let's do it. Or it's, well, I can only afford this big of a mixer, but I really need to feed more feed than that. So yeah, this will work.’”

However, he explains that all mixers need some space in them for the mixing process to work effectively, and that’s at roughly 80% of capacity. “That’s really where we need to be thinking about stopping,” he says.

As Rusche evaluates feeding cattle today, he expressed some concerns about the use of DDGs. While he says feeders in the past could count on distillers to be available quickly, that’s not the case today, which is due in part to the Coronavirus pandemic.

“My crystal ball is kind of dim, but what happens with the work from home trend and electric vehicles—what will that do to fuel demand and what will that do to corn co-products?” he asks. His opinion: “Some of the of the things we’ve been talking about with bunk management will become even more important.”

Rusche addressed feed bunk management on July 16 as part of the SDSU 2020 Feedlot Shortcourse, which is being offered as a seven-week series of webinars.

Approximately 200 people signed up for the program. Registrants were from at least 20 U.S. states and also included participants from Canada, Mexico, Brazil, Australia and South Africa.

Sponsors of the Shortcourse are CHS Nutrition, Dakotaland Feeds and Zoetis.

Click here for more information on the program: https://extension.sdstate.edu/event/2020-virtual-feedlot-shortcourse

Methane: Can Farmers Lead The Way To Lower GHGs?

U.S. Cattle Industry Faces Emergence of its Own Novel Virus
2

A Pound Of Prevention For Hypocalcemia
3

Do Your Heifers Make the Grade?
4

Subclinical Hypocalcemia Costs $125 Per Affected Cow. Here Are 4 Steps To Prevent It.
5