David Heidt (alongside Prince) is always on duty: “When somebody calls in tears, I get there as soon as possible. I try to treat people like I want to be treated.” ( Marta Heidt, Omega Farms )

Death never waits for the gravedigger. When the phone rings at an isolated valley farm hidden in Oregon’s Coast Range, David Heidt drops his field work and listens attentively, calmly soaking in directions and details from a troubled voice. He climbs behind the wheel of a massive white hearse, a 26,000 lb. flatbed Freightliner M2, lined with a unique assortment of heavy-duty gear, and eases down a mile-long driveway before turning onto a county road and setting off to collect another body for burial.

On arrival half an hour later, Heidt finds a crying 16-year-old girl draped across the neck of a fallen, 1,000-lb. mare. He backs off, sensitive to the bond of horse and owner, and waits patiently until the immediate grief subsides. When the moment is right, he loads the horse with the delicacy and skill of a surgeon, and heads back to his farm for interment. At first blush, Heidt, 55, is an undertaker, but in reality, he is a minister of equine comfort. Beneath the ground of Heidt’s canyon corridor, ringed by an amphitheater of Douglas firs perched 700’ above sea level, 2,500 meticulous horse burials testify to his care and service.

Omega Farms, in Noti, Ore., is a mix of grass, goats, hay, and horses, split between 100 acres of idyllic pasture and 277 acres of breathtaking fir-covered hills. When Heidt began an equine burial business as a means of secondary income on his farming operation, it quickly developed into one of the most unique agricultural services in the United States. A sidestream farming venture turned into a genuine ministry.

In 2003, when Heidt’s wife, Marta, lost her horse, a long-time companion and family favorite, Heidt was confronted with the difficult task of burial and found few choices. Beyond rendering plants, expensive crematoria and landfills, the options for respectfully burying a 1,000 lb. animal were extremely limited. Already owning a backhoe and plenty of land, Heidt believed a horse burial business on his property would be successful. His land sits in a rain shadow and despite 80” to 100” of precipitation per year, the red sandstone soil is remarkably well-drained—an absolute necessity for burial. Dig a hole and catch a 2” rain overnight? The hole will be empty by the next day—phenomenal drainage.

Even with pressing burial demand and an ideal location, Heidt still had to pass through a regulatory minefield. The Omega Farms property is designated for exclusive farm use (EFU) by state law, and Heidt had to navigate Oregon’s strict land use codes. EFU regulations enumerate a specific list of permissible activities … and burying animals is not included. Heidt spent $1,200 on a red tape process and wrote an extensive application (more like a pamphlet) explaining what he wanted to do and detailing why equine burials on his farm wouldn’t affect the environment. Eight months later, Lane County issued Heidt a special use permit to bury farm animals, with piggyback permits from the Oregon Department of Agriculture; Department of State Lands; Department of Environmental Quality; and the U.S. Army Corps of Engineers.

“We’re Christians and we prayed for every door to open,” Heidt says. “Over the years I’ve learned that people regret not following a good idea, but I’ve always had an entrepreneurial bent and I’m willing to take risks.”

Paperwork in place, Heidt gathered his gear. He bought an International Lodestar 1700 flatbed and a knuckleboom crane, and built a metal box to hold the horses. Startup costs were low; less than $10,000, he estimates. Heidt later upgraded to the Freightliner and built another steel box lined with armor coating to stave off the rust effects of blood and urine. The flatbed also carries a Polaris 700 ATV with a custom-built hauling sled. “I’ve got backup equipment just in case,” he says. “Reliable equipment is crucial when dealing with decomposition, particularly in summertime.”

Heidt retrieves horses from pastures, sheds and stalls, and each location requires a different extraction approach. Around each leg, he uses heavy nylon straps that connect to pulleys or winches, depending on the situation. The crane picks up the horse and lays it into the flatbed’s steel box (6’ wide, 10’ long, 4’ tall). Once back at Omega, the horse is unloaded with an excavator and placed in a pre-dug hole (10’ deep, 8’ long, 2.5’ wide) on a hillside or in a pasture. “I lay the horses down feet first beside the hole and then slide them in just like they’re lying down,” he describes. 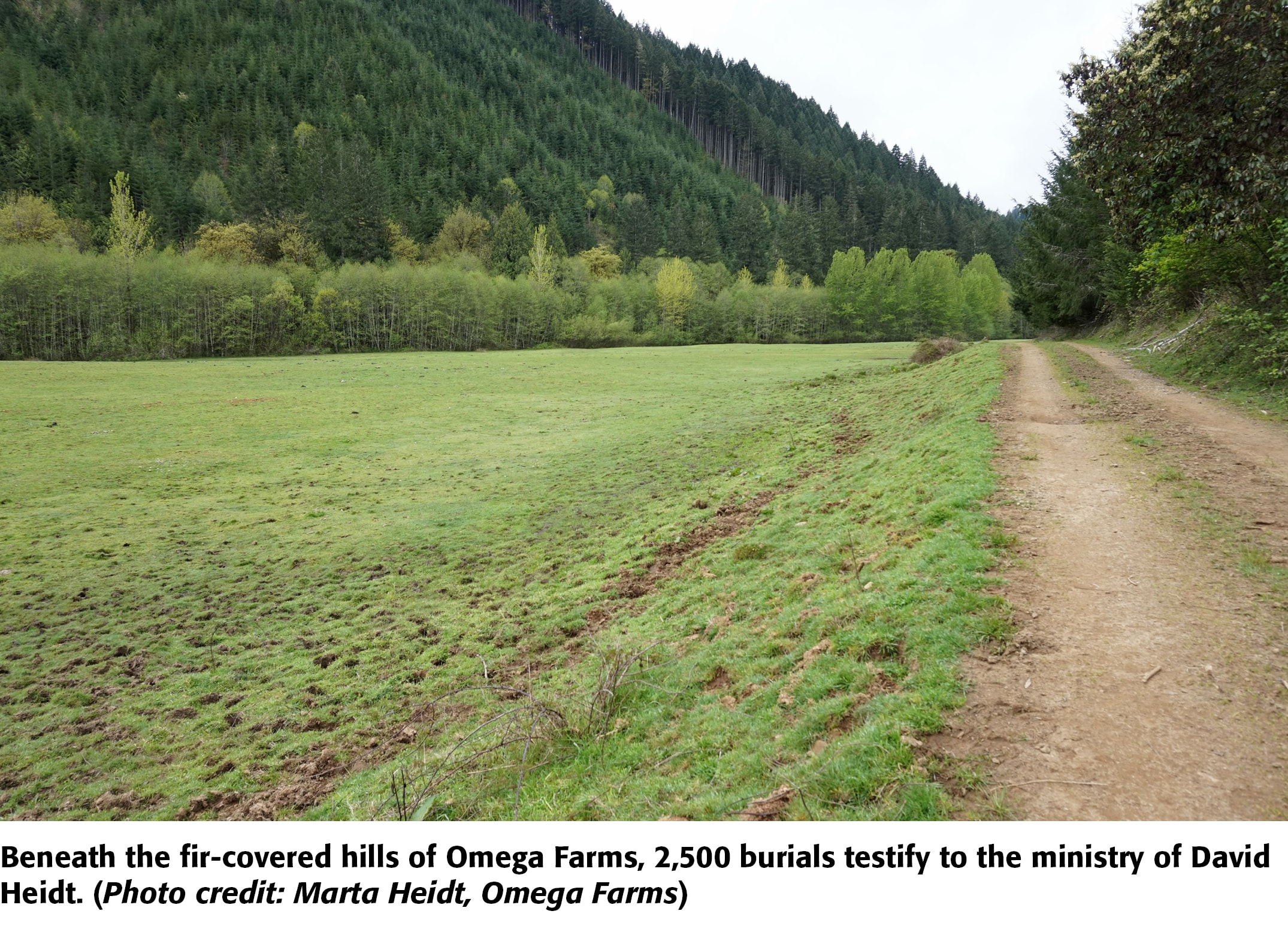 Depending on owner request, he may place a blanket or halter in the grave before adding a sprinkling of hydrated lime and filling the hole with dirt. “The only thing I do to the horses is remove the shoes. Sometimes people want them as a keepsake,” he says.

Heidt maintains an open-door policy for owners to visit and keeps close track of each gravesite with a map and burial information on each horse (name, age, cause of death, and sex). After 1,000 horse burials, Heidt tallied the average age of death at 23, with colic as the most common cause of death. Fall and spring are his busiest times. “In the fall, older horses have a hard time adjusting to the temperature changes, and in the spring, an overabundance of green grass can lead to laminitis or founder,” he notes.

Roughly 80% of Heidt’s customers are women. Deep bonds develop when a 15-year-old girl cares for a given horse every day, feeding it twice and interacting with it on a daily basis, Heidt describes. Her own children grow up with the same horse, but when the kids leave the nest, the horse remains. She’s 50, the horse is 35, and the cords of companionship run to the core of both lives. “Horses don’t argue or talk back; they just calm your nerves. We’re talking about the love of lifetime owners and that must be respected,” Heidt explains.

Heidt’s average price to retrieve and bury a horse is $300. He could charge significantly more; he doesn’t. “I never want to gouge someone who is in grief,” he says. “These people are in a bind and need help. My goal is to never, never drive away having someone feel like I took advantage in a situation beyond their control.”

Chris Camp, veterinarian at Del Oeste Equine Hospital in Eugene, has two horses buried at Omega. “I’m not sure what we’d do without David. He understands the joy of life and sadness of death. It’s incredibly comforting to people to have their horses buried on David’s property. Nearly all of my clients want David to help when they face a final decision.”

Chris Wickliffe, veterinarian at the Cascadia Equine Veterinary Clinic in Corvallis, echoes Camp and says Heidt’s burial service is the finest he’s encountered. “David and Marta treat every horse like it is their own and every client with the kindness and respect that only comes from an understanding of their loss. Their reputation is excellent in the area and their services are invaluable.”

Wendy Jameson runs Smooth Moves Equine, a retirement and rehabilitation stable in Eugene. She has used Heidt’s services on multiple occasions. “Not only has David been gracious and understanding with me as a client, but with my clients' horses as well,” she says. “His reputation is impeccable. I don't know what I would do without his service.”

A 300-mile round trip is roughly the extent of Heidt’s coverage. He doesn’t advertise the equine burial service and customers find him through veterinarian recommendations, word-of-mouth, and a website. If Heidt advertised, he’d be on the road every day battling overwhelming time constraints, unable to provide individual attention he feels the service requires. “It’s just me doing the labor and Marta doing the paperwork,” he says. “Even a small advertisement in the Portland area would bring a trip each day of the week. I couldn’t stay sane.”

Essentially, Heidt’s top dilemma is the lack of a full-time backup; he is always on duty: “When somebody calls in tears, I get there as soon as possible. I try to treat people like I want to be treated.” 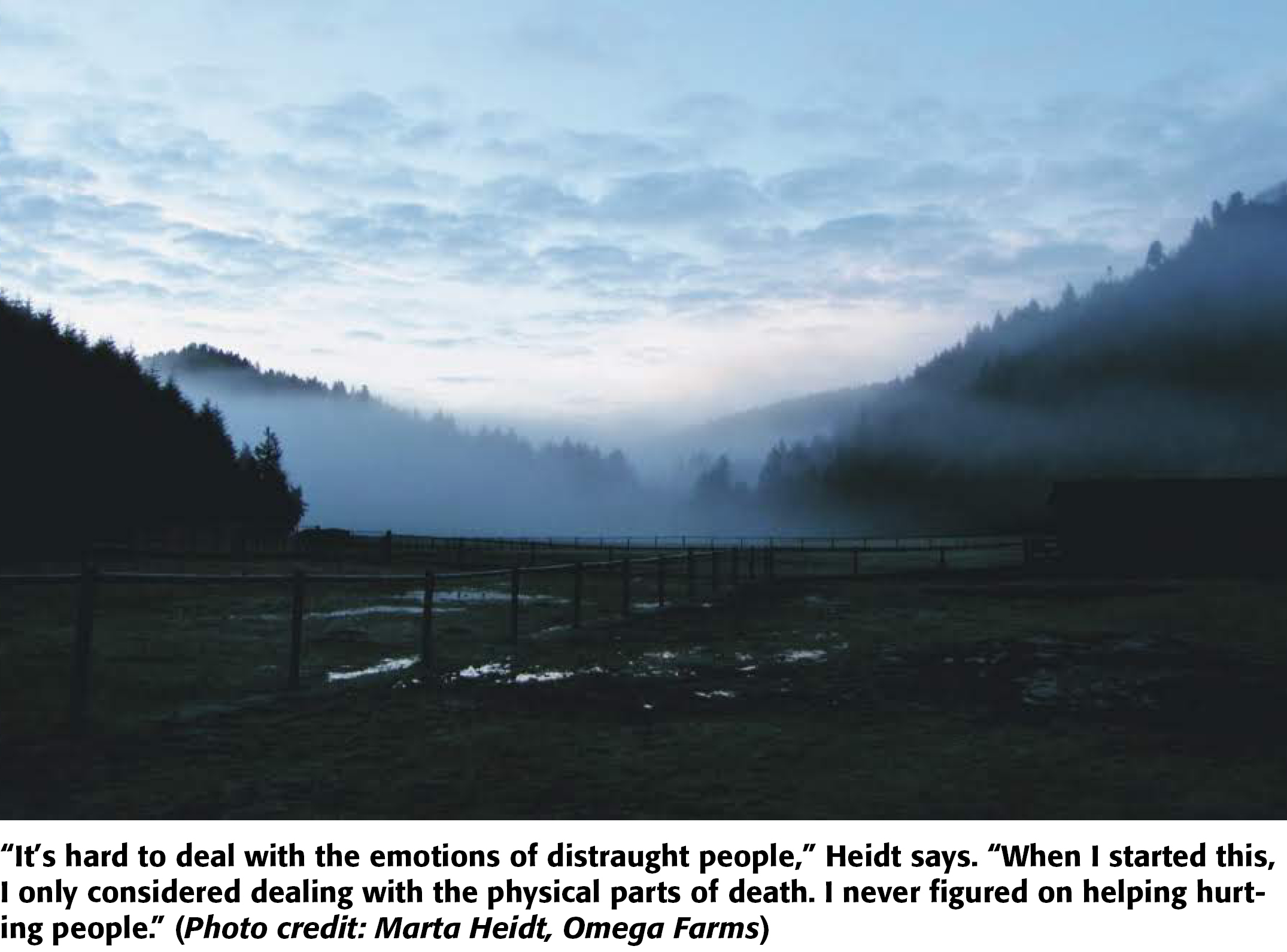 Heidt’s son, Nolan, 26, lives several miles away from Omega and helps when possible, retrieving smaller animals (goats and llamas) for burial that can be hauled in a pickup truck, and operates the heavy duty burial equipment when necessary. Heidt’s daughter, Kiera, 20, sometimes rides shotgun on calls, handling paperwork and helping to get horses ready for hauling.

In addition to time constraints, Heidt admits the mental drain is often a heavy burden. “It’s hard to deal with the emotions of distraught people,” he says. “When I started this, I only considered dealing with the physical parts of death. I never figured on helping hurting people.”

“I’d advise anybody wanting to do this to remember it has drawbacks like anything. I actually encourage other people to do it because it’s truly needed everywhere,” he adds.

Twenty years back, Heidt would have refused to believe over 2,500 horses would be buried beneath his scenic fields and hills. “If somebody told me that, I’d have thought they were nuts,” he says. “But I’ve found out that life isn’t a straight line and nobody can predict the future.”

When the next call comes in to Omega, Heidt will hear the pained tones, turn away from his farm work, and head for the driver’s seat of the big white hearse. Farming is Heidt’s calling, but equine burial is his ministry.

Blood And Dirt: A Farmer's 30-Year Fight With The Feds

In the Blood: Hunting Deer Antlers with a Legendary Shed Whisperer

Who Killed the Finest Soybean Soil in the World?

7 Steps That Can Help You In Tough Times
5